Reason’s greetings everyone! In trying to think of what to post for Christmas this year, I was looking over past posts, and found that I have been slowly spiraling into celebratory celibacy.

I started out okay, in 2010 we learned that Santa’s reindeer are all female, but after that, topics began to have no holiday relation at all like fighting fossils and Spanish moss. Then last year there was nothing! Until in early January when we learned about Myths, which may have had a Freudian quality to it, but bore no mention of the precious and sacred reason for the season. (Axial tilt). Where’s my atheistic war on Christmas spirit? 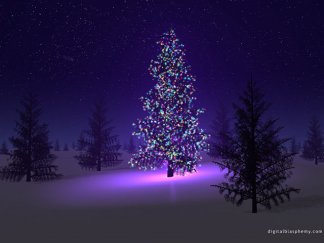 Well, I’m shaping up this year. I’m getting excited about the most nature-based aspect of the holiday, the christmas tree. I’m puttin’ the HR back in christmas to research the most commonly culturally absorbed tradition of winter’s history.

If there’s anything we in the northern hemisphere can agree on, past and present, religious and non, it is this: winter is depressing. The light of day is short, it’s frickin freezing, and everything is dead. Everything except the evergreen tree. Long before Christianity, the ancients would take branches of this hardy evolutionary marvel and decorate their houses to bring a little life and color into an otherwise snowed in and barren world.

We all noticed the shortest day of the year, the solstice on December 21st or 22nd , and fashioned our beliefs around it to explain things.

The Egyptians believed their sun god Ra had become ill, and brought palm rushes into their homes for solstice to celebrate the triumph of life over death as Ra began to recover from illness. The Celts decked their temple halls with evergreen boughs as a symbol of everlasting life, and the Romans had days, sometimes weeks long festivities called Saturnalia, honoring the god of agriculture, and bringing much merriment. Slaves swapped clothes with masters and sat at the head of the table, families gave gifts, and greenery and wreaths were hung. There was singing, dancing, and drinking. Lots of drinking.

So yeah, pagans all over the globe liked christmas before it was cool. Religious takeover of pagan festivities is nothing new, it helps ease the transition of new thoughts and regimes. But Christmas was actually quite the fight, not with the pagans, but the Christians. They didn’t want it. BBC reports, festivities “yo-yoed in and out of favor with Churches because of its association with the more debauched side of pagan festivals like Saturnalia.”

Yes, down with debauchery! Because nothing brings cheer to a comatose landscape like stern solemnity.

Meanwhile, the evergreens were ever green regardless of which god we were or were not celebrating.

Many evergreens can use chemicals in their leaves to act as antifreeze, and photosynthesis can still take place a few degrees past freezing. Their biggest concern is not so much freezing to death, but dying of thirst. Their leathery leaves help retain moisture, and snow can actually help reduce ground evaporation and provide shelter from drying winds.

What is this, a science blog? Back to the history. As Christianity took over Europe and the amount of fun was hotly debated, Christian Germans bumped it up a gnarled notch and went from bringing branches in the house to whole trees. The first documentation of an actual Christmas tree was in 1605, when an anonymous writer recorded festive indoor trees decorated with nuts, sugar wafers, colored paper, apples, and gold-foil.

When a German girl name Charlotte of Mecklenburg-Strelitz was married to King George of England in the 1700s, she brought her Yew bough decorating traditions with her to the royal court, and so the Brits were introduced. 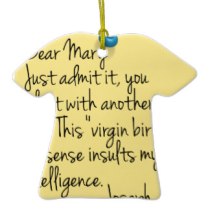 Meanwhile, in most of Europe and America too, haters gonna hate. You think we atheists have a war on Christmas cuz we don’t appreciate naïveté scenes, I mean, nativity scenes, on public land? Check out this hell rant from theologian Tertullian against christmas laurel boughs:

“Let them over whom the fires of hell are imminent, affix to their posts, laurels doomed presently to burn: to them the testimonies of darkness and the omens of their penalties are suitable. …If you have renounced temples, make not your own gate a temple. I have said too little. If you have renounced stews, clothe not your own house with the appearance of a new brothel.” Hah!

Or Oliver Cromwell, who, when not busy slaughtering the Irish, said that “heathen traditions” of christmas desecrated “that sacred event.”

Even the Bible has a confusing passage, that some Christians quoth in protest to the tree: “Thus saith the Lord, Learn not the way of the heathen…. For the customs of the people are vain: for one cutteth a tree out of the forest, the work of the hands of the workman, with the axe. They deck it with silver and with gold; they fasten it with nails and with hammers, that it move not.” – Jeremiah 10:2-4

And the puritans, ever the Captain Bring-Downs of our American foundations, did their part. Cotton Mather of New England in 1712:

“The feast of Christ’s nativity is spent in reveling, dicing, carding, masking, and in all licentious liberty…by mad mirth, by long eating, by hard drinking, by lewd gaming, by rude reveling!” Oh the antagonistic alliterations of animosity! Take that Santa! Where your Ho’s at now? In my stewed-up brothel house that’s where!

It got so bad that Massachusetts actually criminalized celebrating and attached hefty fines for anyone caught decorating.

America would remain in its puritanical boredom until Fashion, that ever powerful force, that swayer of minds and hips, came along to save them.

Everyone-wants-to-be-her Queen Victoria had taken Queen Charlotte’s influence, and encouraged her German husband Prince Albert to bring Christmas trees to the royal house. A sketch of her family standing around their decked out tree made it into the Illustrated London Times, which was devoured by fashion-hungry East Coasters, and suddenly the tree was all the rage. Eventually, America ran out the puritanical view with its other worthless inhabitants (looking at you native americans).

So where did christmas lights come from? Well, candles on the tree had been done for centuries, rumored to have been started by Martin Luther, who was supposedly inspired by seeing stars through the winter trees as he walked home. Actual christmas lights wouldn’t come into play until the 1900s.

Thomas Edison invented the first strand of electric lights in 1880, but due to a general mistrust of electricity, they would not be popular until a few decades later. Because when it comes to illuminating drying pine leaves, always fall back to actual flames just to be safe.

So, as another atheist taking back the christmas tree from the Christians who took it from pagans who took it straight from Nature, let’s not fight. To celebrate is to be human, and we all celebrate different things for different reasons. I’ll make fun of your traditions, you’ll make fun of mine, but let’s all drink to the tree, and promise to be there to help when the other’s house is burning down from those sketchy Edison inventions.

Happy Solstice/Hanukkah/Kwanzaa and a very Merry Christmas to you all! Ho³!