Before I go into this, I just wanna say that some of the following facts change depending on the source, just run with it, it’s Halloween.  Besides, what would a legend be without sketchy tales from less than credible articles from the late 19th century?

Picture yourself in Egypt. You are a farmer in the year 1888, digging around on your land near the city of Beni Hasan (now known as Istabl Antar).  Suddenly your wacky Egyptian 1800s shovel (hopefully complete with hieroglyphics on the stick part) hits something. Some kind of a elongated pod, and at the top is the shape of a cat’s head. Inside is a linen wrapped, natron soaked, cat mummy from 2000 years previous.

Okay, that’s pretty friggin cool, an Egyptian cat mummy in your own backyard. But what you don’t know is that you are standing atop 20 cat mummies. And I don’t mean 20 total, I mean a layer of 20 cat mummies. In fact, your land is a massive grave of Hundreds of Thousands of ancient felines in a stratum 20 cats deep.

Back in the day, cats (known as mau in ancient Egyptian, which is awesome, and I’m pretty sure must have been pronounced: mau?) were often mummified, some even placed at the feet of their similarly preserved owners, to ensure that the Egyptian VIP would have companionship in the afterlife.

But cats were also representatives of the goddess Bast or Bastet (known by many other names as well, but I like this one best(et) and it’s my blog so).

wildcat or lioness, and later as a woman with the head of a cat, she was the goddess of pleasure, music, dancing and joy. ….and of the Sun God’s vengeance against any enemy of Egypt, small detail, but what’s a god without a little wrath of a thousand deaths?

Bastet was worshiped in hopes of gaining protection for the cities that revered her and for blessings of fertility–the women of the Cult of the Cat hoped to have as many children as cats have kittens (um, pass). According to the Greek historian Herodotus (who

traveled there around 454 BC), upwards of 700,000 people would come from all over the country to the city of Bubastis to celebrate the Feast of Bast, supposedly held on October 31st. It was a great festival held on the banks of the Nile with dancing and drinking and partying like it’s …9.

Unfortunately for cats, pleasing the goddess became big business, and the people would pay the priests to mummify cats to gain favor with Bastet. Cats were bred specifically for mummification, often just kittens at the time of death. 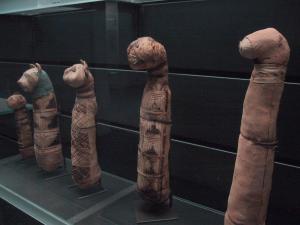 And of course, the more you pay, the more ornate and lavish the mummy you would get. Although, X-rays would later show that sometimes the priests would pinch pennies and give you an empty mummy, or one with just a few random bones in it. Which no doubt infuriated Bastet and doomed you to an afterlife of eternal agony, but it’s nothing personal, just business.

That’s right, the next time you see those lush green fields of England on Masterpiece Theater, you can thank the spirits of thousands of Egyptian cats. The smell is left to the imagination.

Check out these other votive animal mummies:

HOW TO MAKE A MUMMY:

We are a bizarre species.