Not For the Faint of Stomach

October invites the creepy. So I thought, what in Nature makes us cringe? Like really gets to us, I’m talking something so innately disturbing, so physically revolting that we can actually feel our stomachs churn at the very idea of its existence?

Maggots. Isn’t the word itself fantastically appropriate? Instantly infused with grotesque associations of rotting and disease, wriggling, chewing mouth parts deep inside the flesh of a body dead or alive (!) that, as Neil Gaiman once put it, just looks wrong. Scientifically, the term “maggot” officially referes to fly larvae, but for the purposes of this blog, any translucent, wormy minion of the devil counts, as I’m pretty sure our worst nightmares don’t differentiate.

I feel that society is for once justified in

demonizing the maggot. Any creature in this stage of its life cycle should simply not be on-the-outside. I don’t care how species-centric we are, if our fetuses were on-the-outside it would be heinously disgusting, see exaggerated and misleading pro-life posters. But even a natural talent for being atrociously slimy grubs of mucous could be forgiven if they didn’t just happen to be direct signs of death and disease in plague proportions.

Ahh, sigh of relief. Happy fluttering in sunny fields of flowers and cheer. We call their fetuses-on-the-outside ‘caterpillars,’ a friendly, enigmatic term—it’s amazing what a healthy layer of hairs can do for common nomenclature and the human psyche. But it’s a harsh world Attenborough lovers, and the butterflies are just as susceptible to the dark side as we. Today I’d like to talk about how a particular butterfly figured out how to cheat the system. And just what happens to those who cheat the system.

The Cheat: The beautiful European Alcon blue butterfly lays its eggs in the leaves of a plant. The egg hatches, and a little pink, almost hairless caterpillar (gateway maggot) falls to the ground. But they aren’t going to go around fending for themselves like a respectable insect, no. They have spent all their evolution changing their pheromones to smell just like an ant larvae. So before long, an ant finds the little bundle of joy, is confused by the mimicking surface chemicals and says “What?! Baby Herman get your bitch ass back to the nest, jesus, what would the Queen say…” and takes it back to the nest. The caterpillars even mimic the sounds that real ant larvae make to beg for food, and the ants are only too happy to acquiesce. Baby butterfly is set up.

The Horror: The caterpillars are bigger than the ant larvae, and therefore need more sustenance than the ants provide. So what else is there to eat around here but the fat little white ant larvae next door, which is really too close for cannibalism comfort if you ask me.  If all goes well, eventually the caterpillar makes its chrysalis right there among the brood, pupates, and walks right out of the nest to dry its wings and become the idyllic creature we all revere, oblivious to their creepy, thieving, silence-of-the-ants rise to success.

All’s fair in love and insects though, and if a butterfly can do it, a wasp can probably do it better.

The Competition: today’s predator is called the Ichneumon wasp, pronounced Ig-neuman (in honor of Toby, who suggested a parasite blog ages ago, thanks Tobe!).  Actually a parasitoid (= only the larval form is a parasite), this wasp figures the best care for its little egglet is to jump on the freeloader bandwagon.  But it’s going to take breaking into the nest of its nemesis, the ant.  So how is one wasp going to go up against hundreds of ants on their home turf?

The Sting: the wasp barges into the ant saloon with the wooden door flapping wildly behind it, the piano music thunders to a startling halt, someone’s glass shatters on the floor, and all the ants turn and say, “hello,…Ig-newman.” 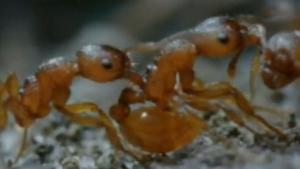 But right as they charge to attack, the wasp secretes a unique chemical compound, and one whiff makes all the ants turn on each other and a dramatic bar brawl of chaos ensues. As the ants fight, the wasp sneaks down to the nursery, sniffs out the subtle 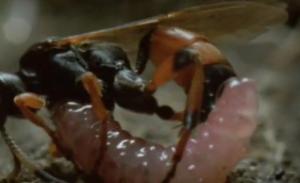 difference between ant larvae and a caterpillar, and injects an egg into its squirming body. The ants still biting their brethren, the wasp walks out scott free. The air eventually clears, and the nest returns to normal. The caterpillars go on as usual, feeding and developing, but some with a painful nagging in their side. They form their chrysalis, and months later some will emerge a beautiful, if hypocritical, Alcon blue butterfly, and others an ominous, but honest, Ichneumon wasp, the maggot having eaten the caterpillar from the inside out and used its host’s own chrysalis to develop into its dark adult form.

An apt ending to a vicious cycle, the parasite becomes the parasitized, and both continue on cheating their way up the evolutionary ladder and screwing over the ants in the process.

Happy October everyone! Eat your maggots!