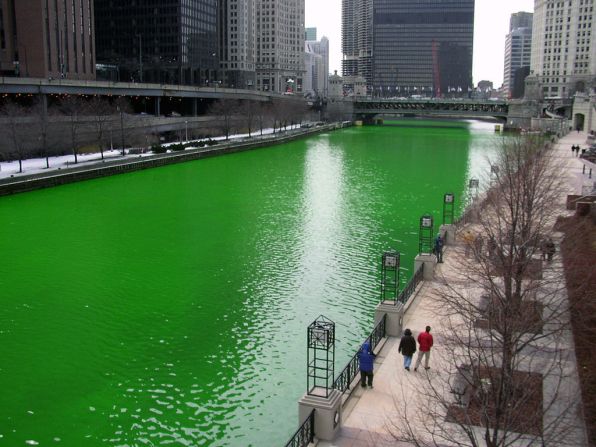 Happy St. Patrick’s Day! An occasion that has morphed so far from celebrating Catholicism that even a secular humanist like me can get on board. As an American, I’m celebrating the contribution of the Irish to our (sometimes) great nation, and that includes those cheeky Irish using science to make things green.

Including the Chicago River!

Wait, they turn the Chicago River green? Yep – on St. Patrick’s Day, there’s a whole thing where thousands of people gather to watch three boats race around in the freezing cold and dye the river green.

And we’re not talking the tepid, ever disappointing RIT dye green, or that sad color of your DIY easter eggs that you euphemistically call ‘pastel’ to cover up its putt puttery as a green.

This is a neon, shamrock green, bright as a leprechaun’s as–*ahem* envy and enough to impress any day-glo enthusiast today.

It all started in 1961 when the Chicago mayor was on a beautification bent that included weeding out the illegal polluters of the river. Plumbers used a powder to find the illegal leakages, which apparently turned one plumber’s white coveralls green.

And, as in all messy situations, the boss noticed. In this case first generation Irish-American Stephen Bailey.

Stephen was also the chairman of the St. Patrick’s Day parade committee, AND boyhood friend of the mayor. A green light bulb went on in his head. Making him the holy trifecta of nucleating the river in celebration of his ancestral home.

Now, he wasn’t the first. Savannah, Georgia had tried to dye their river green the year before, but it turns out that if you have a fast-moving river, it’s about as effective as dying a flushing toilet.

Oh Sure, it was Totally Green declared the Savannah mayor, because without the modern media and lack of prevalent color photography, who’s to know?

So, back to the question – how do they dye the river? Well, early plumbers were using an oil-based toxin called fluorescein (because why not fight pollution with pollution?).

This chemical is actually bright orange that turns green when mixed with water, appropriately representing the other color in the Irish flag.

At first they dumped 100 pounds of it, resulting in the nuclear-disaster look staying for a whole week. They decided to back off a bit.

But then environmental concerns forced a change (fluorescein may or may not tend to kill fish and snails – small details) to a bright orange vegetable dye in 1966. This orange powder also turns green when mixed with water. The exact recipe is a big secret, so the Rachel Carsons among us just have to have faith.

Ask the stewards of the Chicago River for their thoughts on the matter, and they mostly say that there are way worse things to worry about for that river than one day of vegetable dye. What worse things? Well, anywhere from 2.4 to 90 billion gallons of sewage overflow a year to start.

According to the Chicago Tribune, “routine violations” of water quality kinda go against the idea that the river ought to “be clean enough to prevent kayakers, rowing teams and boaters from suffering diarrhea and other gastric ailments.” Mmm, sell it!

The director at Natural Resources Defense Council says, “My guess is most people flocking to the Riverwalk aren’t aware of the intestinal miasma just a few feet away from them.” How can you not love a nature-lover that says ‘intestinal miasma’?

The mayor said last year that “Lake Michigan is our Yellowstone. (The river) is our Grand Canyon. We have to treat it with the same type of respect.”

And what better show of respect than a transformation reminiscent of three-eyed fish and radiation?

Indeed, the Exec of Friends of the Chicago River has nothing against the idea of celebrating St. Patrick’s Day, but thinks the dying “sends a message to people that the river is not alive. Can you imagine there’s actually beavers living there? Because there are. You would never do that to a beaver. … Dyeing the river green does not respect that resource.”

Ironically, pollution was the inspiration for another event in this exact same river’s odd history. See, the Chicago River flows in the opposite direction that it did in nature. Story time!

In 1865, when the ever growing Chicago was fast becoming the industrial meat-packing icon that The Jungle had to ruin for everyone, the place was rife with waterborne cholera and typhus.

Chicagoans dumped their sewage into the Chicago River, which flowed into Lake Michigan, from which the Chicagoans drank – creating a beautiful cycle of death and re-death from this bubbling cauldron that was the Great Lake grab-bag of disease.

For some reason, fixing pollution and waste systems seemed harder than reversing the gravity of an entire river and sending your problems somewhere else – like Missouri!

So, in 1887, the great project of digging a canal that progressively deepened away from the lake was begun. Ceaseless arguments between contractors and district, and 38 million cubic yards of digging later, we showed the ancient glaciers of North America the correct way to flow a river.

The grand opening was actually hush hush and hurried to avoid an injunction from the courts – pesky Missouri was decidedly unkeen on receiving Chicago’s sewage, imagine.

But to be fair, Chicago’s disease rates did go down significantly, and luckily the towns downriver didn’t see an uptick. Turns out the water dissipated the disease over some distance. That, and soon Chicago would build water treatment plants that took care of the sewage (you know, unless it overflows once every 6 days on average even in the 21st century).

In other words, it’s all fixed(ish) now, so go remember the Irish folks, even if you have to settle for fountains.