What Are Gravitational Waves?

I think we can all understand gravitational waves if we just put our minds to it. I observe that:

Therefore, gravitational waves are apple-flavored fruit leathers that, when you hold it by both ends, can make the wavey wavey shapes. And we’re done here.

Unless you want science, in which case I’d have to explain real things. Which doesn’t make me want fruit leathers any less.

Okay, basics. Gravity isn’t just a one direction thing. Nor just a thing that only our planet has (I’m looking at you Flat Earthers).

It’s something that spacetime has. Spacetime is three dimensions of space and one dimension of time, all combined in one continuum of four dimensions.

In other words, spacetime is a giant, taught blanket that engulfs everything. Except this blanket isn’t 2D but 4D – 3 spaces, 1 time. Blankets in every direction. Very warm. (The universe is actually quite cold. Vicious liars those blankets.)

Now, the universe is full of mass (planets, black holes, etc). This is like distributing a bunch of balls and peas onto each blanket. These cause distortions to the blankets, felt as gravity.

However, if those balls/peas do stuff like explode or collide, the blankets then ripple, and these ripples are called gravitational waves. It’s kind of like tapping a floating buoy on still water, making ripples flow out in every direction.

(If you would like to learn more about floating buoys, watch this 1 minute 19 second Youtube video of nothing but two floating buoys in an indistinguishable body of water. Let’s get those 15 views up people!)

Einstein predicted these gravitational waves with his theory of general relativity in 1915. In an essence of quaintness, 100 years later (2015), the Earth felt the stretch and squeeze of a gravitational wave, and humans caught it red-handed.

Now, as catastrophic as ‘gravitational waves’ sounds, these waves are itty bitty to the extreme, ruining any accuracy of future sci-fi action movies. These waves were measured to be a few thousandths of the diameter of a proton. (Which was recently found to be 4% smaller than originally thought. Because unimaginably small just wasn’t small enough for some physicist, and they had to go ruin it for all the other physicists who now have to rewrite their thesis).

But don’t cancel your James Cameron contract yet, the reason for the 2015 waves was because of something mega-giant.

But first, how did they detect these ridiculously small waves? A big ole machine elbow.

To help explain this elbow machine, let’s meet Jack. And the house that Jack built. Picture Jack 2.5 miles north of his house. He shines a laser pointer into the window of his house in a straight line (to mess with his cat). 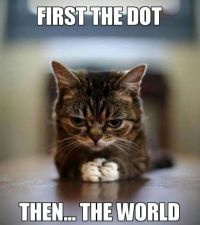 Because I wanna be just like him, I am also 2.5 miles away from his house, but east, forming a right triangle. I also shine a laser into his house, so both of our beams are perpendicular to each other.

Because his light now must travel slightly farther, and mine slightly less, our waves get out of sync.

How can we tell when this happens? His cat would be able to tell…assuming ‘cat’ is an acronym for Catastrophe Auto-detecting Technocomputer.

How Science Proved It

This is generally what the real scientist’s machine, called the Laser Interferometer Gravitational-Wave Observatory (LIGO), does. It has a laser beam going along a 2.5 mile long arm, and mirrors bounce it back to the origin spot, then bounce it 2.5 miles the other direction.

Since it’s one laser, the waves are definitely, exactly synced. September 2015, those mirrors imperceptibly twitched, and the internet exploded.

What caused the waves? Well gather round ye consumers of Star Wars, cuz long ago, in a galaxy literally far far away (1.8 billion light years in fact), two black holes 30 times the mass of our sun collided. Somebody bitch-slapped the buoy.

1.3 billion years later, Washington state and Louisiana (in it together, how, why??) detected it. Scientists subsequently lost their minds, doubted, tested, ruled out a lightning strike in Africa (no joke), then settled on the fact that true awesomeness had occurred.

Since then, we have tracked other collisions, and Italy has joined the cause with their own long-armed observatory called VIRGO.

The ESA (European Space Agency) is even toying with the idea of putting one in space with arms over 600,000 miles long!

In conclusion, gravitational waves are what happens when you bop something in the universe.

Today’s blog brought to you by Patreon supporter Jack B. Thanks Jack! Find me at Patreon, cuz you know you wanna be just like him and support your local science enthusiast.

Photos in the public domain (thanks NASA) except:
curvature – photo by Johnstone, CC by SA 3.0
first the dot– wherever lol cats come from
bop it game – photo by Larry D. Moore, CC by SA 2.5