Have you ever wondered how spiders can possibly make so much of webbing?  It’s constant webbing all the time.  I thought our perpetual saliva production/recycling was impressive, but then someone gave me six saltines and I was sorely disappointed in our species.  Like it’s not bad enough that we only have two legs and two eyes.

The only consolation I have is that webbing is carried in liquid form in a sack inside the spider (only when it makes contact with air does it solidify and be the default webbing we know and love and wipe off our face every time we go empty the compost.  Not that I’m bitter).

I may not be able to construct stronger-than-steel dreamcatchers on any old branch, but at least I don’t feel like I have to pee all the time.  Four sets of crossed legs amuses me.

Surely you’ve all heard of drugged spiders, which will always be fascinating, it’s the law.  I thought I would include this picture on principle, as a subtle reminder to the coffee drinkers of Portland just what Caffeine is doing to their productivity.  See other spider drug effects here. 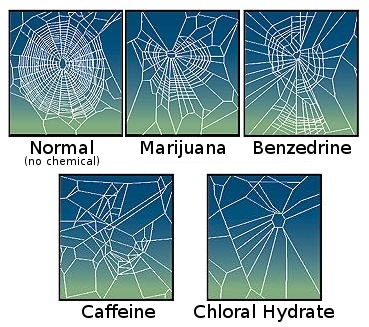 In 1973 two humiliated European Garden Spiders (Anita and Arabella) were put onto a shuttle called Skylab 3 by Massachusetts college student Judy Mills to see if anti-gravity webs would be any different then peaceful, flowers-in-your-hair, earth webs.

The “spidernauts,” having been launched in their space vials, were totally WTF for a few days and had to be coerced onto the provided window box after impatient experimenters got tired of waiting.  Eventually, Arabella did make a web, the silk varied in thickness, unknown in gravity-laden spiders, but you try making a web in space and see how perfect you can be.

They then fed the spiders fillet mignon, gave them more water, and Arabella made a more consistent web.  Yes, fillet mignon, for serious.  Nasa Mignon is right next to the space ice cream at the science museum evidently.

Both spiders died on the flight.  Why?  Well, there was evidence of dehydration, my dear Watson. Ironically, despite this pronouncement, they buried them in a bottle of liquid. Science!

Exactly 30 years later another shuttle was launched, the STS-107 (lame, what happened to cutesy 70s names like ‘Skylab 3?’), one entirely for scientific research with over 30 experiments to conduct and seven crew members to conduct them.  The shuttle was in space for its scheduled 16 days.

However, it disintegrated upon reentry into the earth’s atmosphere, leaving no survivors. Whoa, what? Didn’t see that coming?

Apparently some foam piece broke off the thermal protection system or something, and the spiders are now space-buried next the 30-years-previous spiders, as “equally confused spiders of the future.”

Photos in the public domain or taken by me, EXCEPT:
anita bottle – photo by Sanjay Acharya, CC BY-SA 4.0